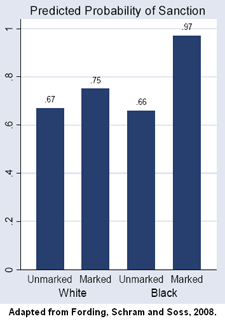 Social service providers, including those working with low-income noncustodial parents, should be attentive to how case management decisions impacting their clients can be affected by bias due to racial stereotypes. A body of research from the last 20 years has shown that people of color are more negatively affected than white people in a variety of contexts—as job seekers, medical patients, and retail customers—when a person has a “marker” or cue that is consistent with a negative racial stereotype, for example if an African American man has a criminal record. This type of negative bias has been confirmed in welfare-to-work programs as well, based on research that interviewed case managers and reviewed administrative data.

Joe Soss, Richard Fording, and Sanford Schram published a book, “Disciplining the Poor,” in 2011, that gathers findings from many of their studies on social services for low-income people. The results of their research on how racial bias affects sanction decisions in case management are summarized in a freely-available presentation:“Sanctions and Welfare Reform: The Florida Project.” Although their focus was on welfare-to-work programs, their findings likely apply to other social service settings where clients can be penalized for not following program rules. This may especially be true in programs serving noncustodial parents that track attendance, job-search activities, work hours, and child support paid. Noncustodial parents of color in such programs, particularly African Americans, may be harshly affected if racial stereotypes influence case managers’ decisions. Sanctions in programs serving low-income noncustodial parents can in turn often lead to a punitive response from the child support enforcement system and/or the probation, parole, and criminal justice system.

The following are findings from the work of Soss, et al, that case managers working with noncustodial parents should be aware of: