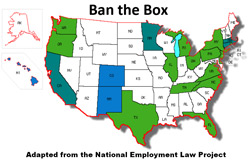 Increasing employment opportunities for people with criminal records is the goal of “Ban the Box” efforts in states, counties and cities across the nation. The “Box” refers to the question—often a checkbox—about a job applicant’s criminal record on an employment application. Policies to “Ban the Box” aim to remove this question from initial job applications and to postpone a criminal background check, if any, until the job applicant has reached the point of being considered for an interview or has a conditional job offer. The idea is that applicants would have a better chance of being evaluated on their qualifications for the job, rather than not even being considered due to a criminal record. “Ban the Box” policies also give individuals the opportunity to explain their criminal record, if any, during the hiring process and to dispute any information that is incorrect.

Social service providers and low-income noncustodial parents may consider becoming involved in “Ban the Box” advocacy campaigns in their state, county, and/or city. The National Employment Law Project maintains a webpage with resources about the Employment Rights of Workers with Criminal Records. According to NELP’s reports from the fall of 2012, six states have “Ban the Box” policies—Connecticut, Colorado, Hawaii, Massachusetts, Minnesota, and New Mexico—as do 43 cities and counties including major population centers such as “Chicago, Jacksonville [Florida], Philadelphia, San Francisco, Memphis [Tennessee], and Baltimore.”

The following list highlights local organizations that practitioners and parents can contact to get involved in efforts to “Ban the Box.” These include cities and counties which have already enacted policies, but where statewide action is still needed: