The Fatherhood Movement and Domestic Violence 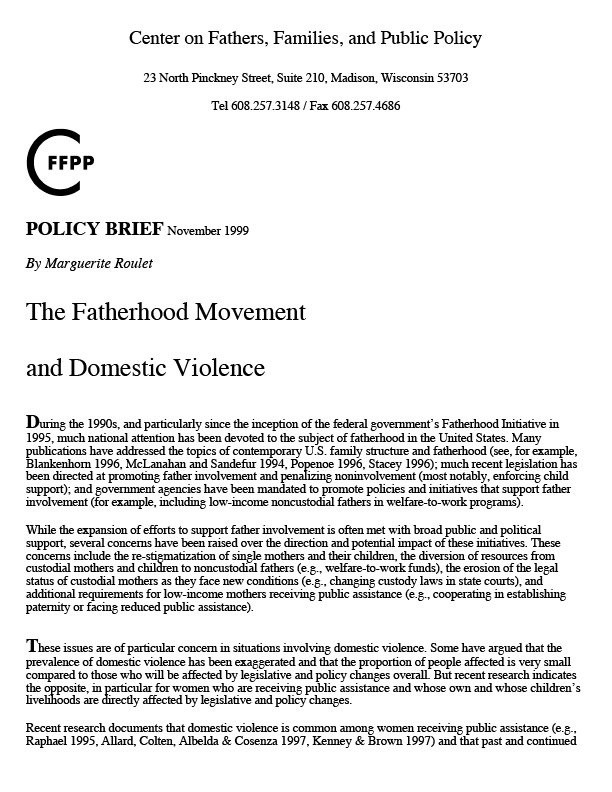 During the 1990s, and particularly since the inception of the federal government’s Fatherhood Initiative in 1995, much national attention has been devoted to the subject of fatherhood in the United States. Many publications have addressed the topics of contemporary U.S. family structure and fatherhood (see, for example, Blankenhorn 1996, McLanahan and Sandefur 1994, Popenoe 1996, Stacey 1996); much recent legislation has been directed at promoting father involvement and penalizing noninvolvement (most notably, enforcing child support); and government agencies have been mandated to promote policies and initiatives that support father involvement (for example, including low-income noncustodial fathers in welfare-to-work programs).

While the expansion of efforts to support father involvement is often met with broad public and political support, several concerns have been raised over the direction and potential impact of these initiatives. These concerns include the re-stigmatization of single mothers and their children, the diversion of resources from custodial mothers and children to noncustodial fathers (e.g., welfare-to-work funds), the erosion of the legal status of custodial mothers as they face new conditions (e.g., changing custody laws in state courts), and additional requirements for low-income mothers receiving public assistance (e.g., cooperating in establishing paternity or facing reduced public assistance).

These issues are of particular concern in situations involving domestic violence. Some have argued that the prevalence of domestic violence has been exaggerated and that the proportion of people affected is very small compared to those who will be affected by legislative and policy changes overall. But recent research indicates the opposite, in particular for women who are receiving public assistance and whose own and whose children’s livelihoods are directly affected by legislative and policy changes.