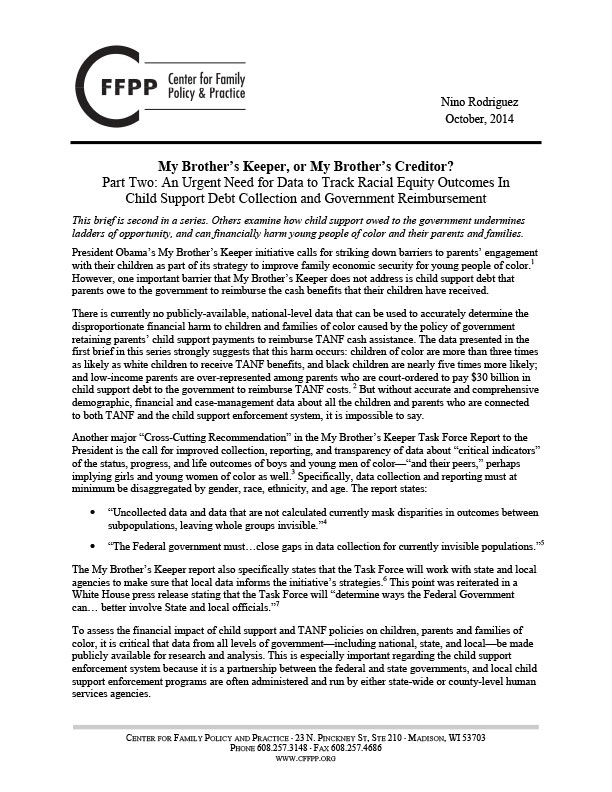 This brief is second in a series. Others examine how child support owed to the government undermines ladders of opportunity, and can financially harm young people of color and their parents and families.

President Obama’s My Brother’s Keeper initiative calls for striking down barriers to parents’ engagement with their children as part of its strategy to improve family economic security for young people of color. However, one important barrier that My Brother’s Keeper does not address is child support debt that parents owe to the government to reimburse the cash benefits that their children have received.

There is currently no publicly-available, national-level data that can be used to accurately determine the disproportionate financial harm to children and families of color caused by the policy of government retaining parents’ child support payments to reimburse TANF cash assistance. The data presented in the first brief in this series strongly suggests that this harm occurs: children of color are more than three times as likely as white children to receive TANF benefits, and black children are nearly five times more likely; and low-income parents are over-represented among parents who are court-ordered to pay $30 billion in child support debt to the government to reimburse TANF costs. But without accurate and comprehensive demographic, financial and case-management data about all the children and parents who are connected to both TANF and the child support enforcement system, it is impossible to say.