If I Had Money: Black Fathers and Children, Child Support Debt, and Economic Security in Mississippi 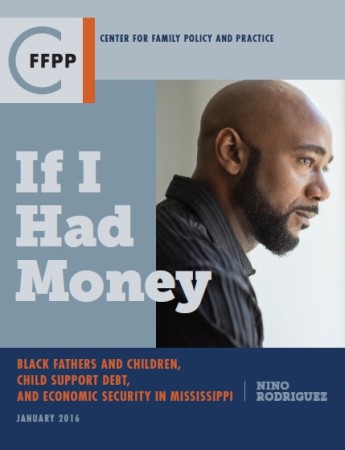 “If I Had Money” explores how court-ordered child support can create barriers to building economic security for Black parents, children, and their families—especially when the court-ordered debt is owed to the government. To further investigate the economic security of Black children, teenagers, and their fathers in Mississippi, CFFPP and the Coalition for a Prosperous Mississippi conducted focus groups and listening sessions with Black men, women, and high school students. These discussions were held in several communities across Mississippi, from the Delta to the Gulf Coast, during the spring of 2014. Altogether, about 100 people shared their voices and perspectives. Several policy recommendations are suggested by the discussions we had across the state, all focused on making sure children have the support they need—as well as their parents and families.

• Expand training and employment services run by community-based organizations and human service agencies.
• Strongly enforce anti-discrimination laws in employment, and remove records of child-support related arrests from online databases.
• Ensure that child support orders are based on parents’ actual income and ability to pay.
• Send 100% of child support payments to children’s households, and eliminate using payments to reimburse the government for cash assistance benefits.
• Give fathers credit for support provided directly to their children.
• Stop suspending parents’ driver’s and other licenses when they have no ability to pay.
• End the practice of courts and child support officials asking if parents’ friends and family can help pay court-ordered child support.
• Stop threatening to incarcerate parents who have no ability to pay.