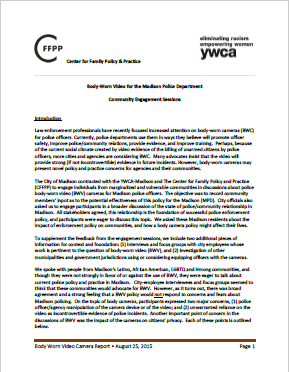 [Excerpts from the Introduction:]

The City of Madison contracted with the YWCA-Madison and The Center for Family Policy and Practice (CFFPP) to engage individuals from marginalized and vulnerable communities in discussions about police body-worn video (BWV) cameras for Madison police officers. The objective was to record community members’ input as to the potential effectiveness of this policy for the Madison (MPD). City officials also asked us to engage participants in a broader discussion of the state of police/community relationship in Madison. All stakeholders agreed, this relationship is the foundation of successful police enforcement policy, and participants were eager to discuss this topic. We asked these Madison residents about the impact of enforcement policy on communities, and how a body camera policy might affect their lives. …

We spoke with people from Madison’s Latino, African American, LGBTQ and Hmong communities, and though they were not strongly in favor of or against the use of BWV, they were eager to talk about current police policy and practice in Madison. City-employee interviewees and focus groups seemed to think that these communities would advocate for BWV. However, as it turns out, there was broad agreement and a strong feeling that a BWV policy would not respond to concerns and fears about Madison policing. On the topic of body cameras, participants expressed two major concerns, (1) police officer/agency manipulation of the camera device or of the video; and (2) unwarranted reliance on the video as incontrovertible evidence of police incidents. Another important point of concern in the discussions of BWV was the impact of the cameras on citizens’ privacy. Each of these points is outlined [in the full report].

Focus group participants clearly understand the need for police protection and civic order, and they had numerous positive examples of individual officers and incidents. Generally, however, across groups, participants articulated an overriding fear and distrust of police, and a strong belief that policing in Madison’s vulnerable communities is driven by racial discrimination and profiling. …