Two recent reports from MDRC provide recommendations that may be valuable for practitioners working with low-income noncustodial parents to find and maintain employment. The reports examine the final results from several demonstration programs in the past decade that aimed to improve employment among people facing difficult obstacles. “What Strategies Work for the Hard-to-Employ?” focuses mostly on public assistance recipients, but also on former prisoners, who are the focus of “Returning to Work After Prison.” Although these reports do not specifically address the challenges facing low-income noncustodial parents who owe child support, the lessons learned may be useful for the design and implementation of programs working to improve the employment prospects of such parents. 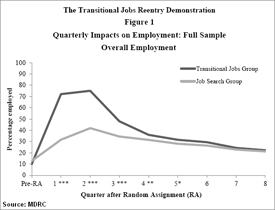 Transitional jobs—short-term subsidized jobs with support services—appear to be an effective way to temporarily boost employment among people who might otherwise not have worked, for example former prisoners. It should be noted, however, that these programs did not increase participants’ chances of finding and maintaining unsubsidized regular employment in the long term. As can be seen in the chart, in one program for former prisoners, the Transitional Jobs Reentry Demonstration, both program participants and members of a control group had very low employment rates at the end of two years.

As noted in the “What Strategies Work…” report, in several of the programs, a large majority of the people in the control groups “were employed at some point,” suggesting that “sustaining employment was the more frequent challenge.” The following are recommendations for how to improve such programs combined from both MDRC reports: